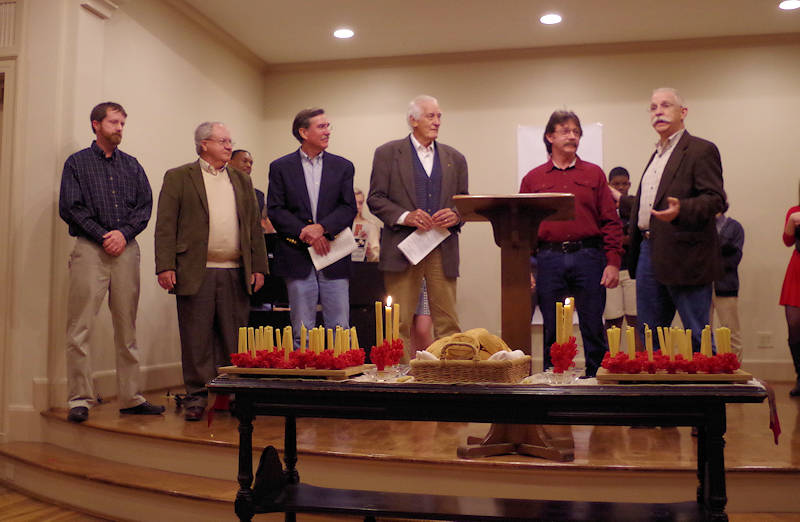 Michael’s tribute to Bill Ingold, chapel project coordinator, presented at the Forest Chapel Dedication on December 9, 2015. Pic at top: Bill on the right thanks all the contractors.

Most of you know Bill Ingold as the usher with a sardonic wit and an astonishing mustache, who makes playful quips at church-goers, or who hides forks and TV remotes in the freezer when he visits your home. But there are many more sides to him, and I might know him in a few more contexts than most of you.

When I first came as pastor, I suggested that the pastor should not also be the moderator of the church business meeting, in case of fights. Who shall we get then? they asked. Then we discovered we had an expert in Roberts’ Rules of Order, one who actually when to different police departments around the country to teach it. One of the best decisions we’ve ever made here at CP.

When he was serving as a Captain in the Greensboro Police Dept., I went on two ride-alongs with him. Both increased my prayer life. The first night he dropped me off after midnight because all seemed quiet, only tell me the next day that there were shots fired at the police at 3 am in a parking lot a few blocks from my house. The second night he had a large squad of officers in full riot gear ready to go into the coliseum when (Bill’s favorite artist) Notorious B.I.G. failed to show. The box office finally relented and gave people their money back, thus avoiding a riot, but my eyes were wide seeing all those men and women suited up and ready to go.

Bill has the ability to adapt himself to new stages in his life. After he retired from GDS, he took on several new challenges. He’s revamped the Habitat for Humanity board here, during a difficult transition time. He was chair of the Greensboro Mental Health Association, leading them to financial health and changing the culture of that board to be fully functional. For several years he drove a morning student bus for UNCG students, taking a number of lost students under his wing, especially returning veterans who needed some care readjusting back into civilian life. For years, he was the leader of the Eagle Scout board for the Old North State Council, which enables young men to achieve this prestigious rank (as he is an Eagle himself). He recruited me to serve with him there, and I see what a kick he gets out of helping others earn scouting top rank.

Several years ago I asked for the formation of a committee to investigate refurbishing this chapel, and seven of us met for 13 months. This committee brought a motion to the deacons and church as a whole to go forward with the chapel renovation. Bill was skeptical at first, not sure this was the direction the church needed to move. But we visited other churches’ chapels and saw before and after pictures, and heard the testimonies of how other churches now use their chapel for a wide variety of meetings, events, and worship—then Bill was completely convinced, and became the driving force for this renovation. He shared my values and caught a vision for what this space could be early on, and he and the other committee members realized how this space had become disused as it seriously deteriorated.

We could not have done this renovation without Bill Ingold. He has spent countless hours here checking on progress and consulting with Carl, Joe, Bernie, Eric, and Richard. He practices what he preaches to the scouts about leadership: he knows about delegating and garnering buy-in from people. He ran the renovation committee with ease. For example, he enlisted Isaac Cravey to help him with the coffee bar trim-out; Isaac might be one of our few members who might be alive to see the next renovation of this space. Bill combines a willingness to hold people accountable while being a good people-person, remembering that relationships matter. Bill is himself an expert carpenter, as you can see from the mug cabinet, and radiator covers that he crafted from pew wood. He has insisted from the beginning that the renovated chapel reflect the proud heritage that we have here at College Park. So the he shined and refurbished all the brass fittings and locks that originally were here, and it was he who suggested the fitting name Forest Chapel, as a nod and remembrance to this church first being called Forest Avenue Baptist in 1906. The Rock Maple floors are an ongoing reminder of the wisdom and generosity of those who worshipped and served here before us, and this renovation honors them.

It was Bill who added a layer of foresight regarding detail, such as upgrading wiring and moving from 3 outlets to 65. Almost 2 miles of new wiring goes into this electrical upgrade, which might last another 50 years. My good friend, who is a fellow minister at a sister church, was so envious that we had someone like Bill to oversee this project. When they did a renovation at her church building 5 years ago, they neglected to upgrade the wiring. Consequently, now they are planning to redo much of the renovation in order to get access to the electrical that now must be replaced. “I wish we had someone like him,” she said. “No one had the foresight to plan an extensive electrical upgrade.”

Bill is that rare blend of being an overarching visionary as well as a guy with precise attention to detail. Two great gifts rarely found together. Bill, thank you for your countless hours spent in service to God and this congregation. We have planned a Firegood Japanese Maple outside the front door here in your honor. Also we have a plaque fashioned out of the historic 70s blue shag carpeting that once hid these floors for you to hang in your study, but it’s not ready yet—we’re still spilling coffee on it.

Bill, for everything, thanks. As you like to say, well done! 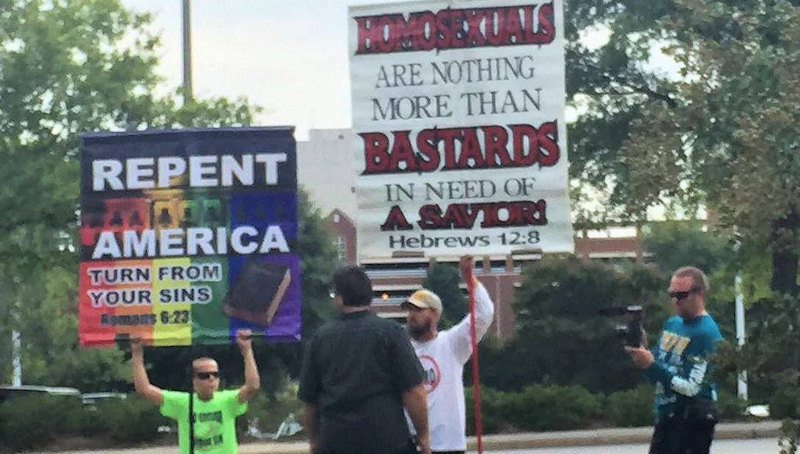 One More Time: Our Protesters