I have always had a fear of Bebe dying. At eight years old, I came down the stairs one morning, inconsolably sobbing. My mom asked me what was wrong, and I told her I had had a dream that Bebe died. She started to comfort me, and I quickly interrupted her to tell her that I wasn’t sad that Bebe was gone, I was sad that she didn’t leave us her cake recipe. If you have had Bebe’s caramel icing pound cake, you will understand.

Many of you know my grandmother as the Fisher Park celebrity or the woman who lived in Deep Roots Market but for a young girl, there was no better grandmother than Betty Ruffin. Sleepovers with Bebe were the best nights of the week. If you never had the pleasure of being on the receiving end of a “Bebe Back Rub” you are missing out. Pearce will agree, those arthritis-stricken hands were magic. She was always eager to take me into her closet to pick a nightgown and a pair of slippers and loved that I preferred the pajama selection of a 75-year-old over my own. We would wake up in the morning and make our way to Smith Street Diner where Bebe would challenge me to see how many pancakes I could eat. I believe this was strategic preparation for later in life, when she would sit there, filled with pride, as I ate an entire chocolate pie.

I thought I was Bebe’s best friend, until Alexa came along. If you have ever been in my grandma’s house, you may have seen one of her three Amazon Alexa’s. I thought one would be sufficient, but she made it very clear that she needed touch free access to music in every room. This was only the start of her technological endeavors. At 87 years old, Bebe used an iPad, an iPhone, and an Apple Watch to watch Netflix, read the news, talk on the phone while walking in Fisher Park, and to send her “Daily Ray of Hope” emails that I am sure many of you also received. It took many training sessions to teach her how to do any of this but at the time, I didn’t realize how much I would miss deciphering her notes that read “screen won’t go black” and showing her how to open a new tab for the 100th time. While I am telling you this because I know Bebe would want me to brag about how tech savvy she was, the reality is that this is just another example of Bebe’s love of learning and child-like curiosity. She lived for deep conversations with people who had experiences different than her own and sought to learn and understand who they were at their core.

There were very few people who genuinely cared as much as Bebe, but as someone with seasonal allergies, this could be problematic. I remember many spring days, I would go over to Bebe’s for dinner or a technology tutoring session, and I would have to intentionally withhold my sneezes and sniffles as to not alert her to my less than perfect health. This was a universal experience for our entire family. After her accident, when Bebe was in the hospital, my dad bent over to kiss her forehead. While he was close to her ear he began to sniffle, as one does when they are crying, but my dad, almost like a reflex, quickly whispered “Don’t worry Mom, it’s not a cold. I’m just really sad.” Because of Bebe, I don’t have memories of being sick as a child. I have memories of staying home from school, eating orange popsicles from Earth Fare, and cuddling with a large stuffed dog named Barkista that Bebe claimed could cure any illness. Bebe made even my sick days seem fun.

This kindness was extended to everyone that Bebe met. Every time I went to visit, Bebe had a new friend that she had made the day before in the Whole Foods parking lot while returning her “buggie.” This friendship was usually sparked by the other person’s “absolutely divine” shirt. While I enjoyed watching strangers fall in love with my grandma, I am excited to be able to walk through Trader Joe’s without having to stop to take pictures of random people’s babies. The number of photos that Bebe had of other people’s children in her camera roll would be incredibly alarming if I didn’t know she only took them so that she could send them to many of the people sitting here today. Yes, she would send pictures of these children because she thought you would enjoy them, but really, she just wanted you to know that she was thinking of you and that you were important. I think we can all agree that there has never been a time where my grandma has made any of us feel forgotten, and I will bet money, that if she had your address, you have received at least one handwritten card. One of the best messages I have received since Bebe’s passing, was from my friend Gray who reminded me about all the times that Bebe had mailed me newspaper clippings about a newly discovered deep-sea creature or the birth of a baby panda at the San Francisco Zoo. If she thought you might enjoy it, she would cut it out, write little notes in the margins, and mail it to you.

I truly believe that Bebe loved to send cards to those she loved, because she knew the value in receiving one. Over the past ten days, we have found boxes and boxes of cards, and it has become clear that she saved almost every card that was given to her, just like I have saved every card she has ever given to me. These stacks of cards are a testament to how much Bebe was loved and what was most important to her, her friends and family. I know she is looking down with that contagious smile on her face and would be so happy to see all her favorite people, sitting here, laughing at her quirks, and rejoicing in the beautiful memory she has left. I like to imagine that if she were here, she would be walking around taking photos of every flower bouquet, cupcake, and child in hopes of attaching them to an email and sending a little joy to those she loved. While it is painful that I can no longer hug her, hear her laugh, or steal brownies out of her freezer, I know she will always be here, cheering me on and pushing me forward. And as we all know, she was too much of a busy body to do that for just one person, so I hope all of you find peace in knowing that she is doing the same for you. 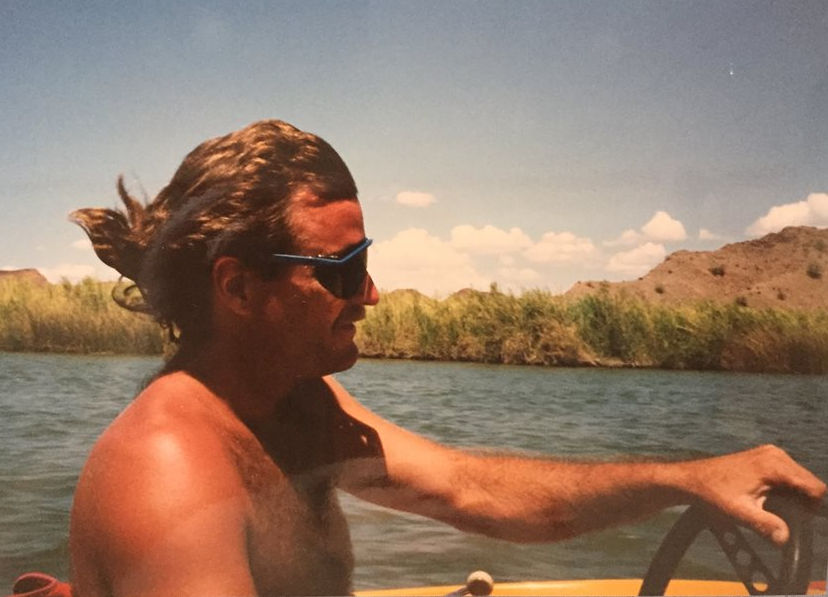